Upgrading the Kernel of a Linux VM hosted in Azure

I’m running a CentOS Linux VM on Azure in the Australia East Region (Sydney) and I need to access a CIFS (Common Internet File System) share in the Azure Southeast (Melbourne) region.

CIFS is also known as SMB, you know, the \\ImaNetworkShare file(s) over the network. This is possible in Windows but so far not in Linux prior to Kernel V 4.0 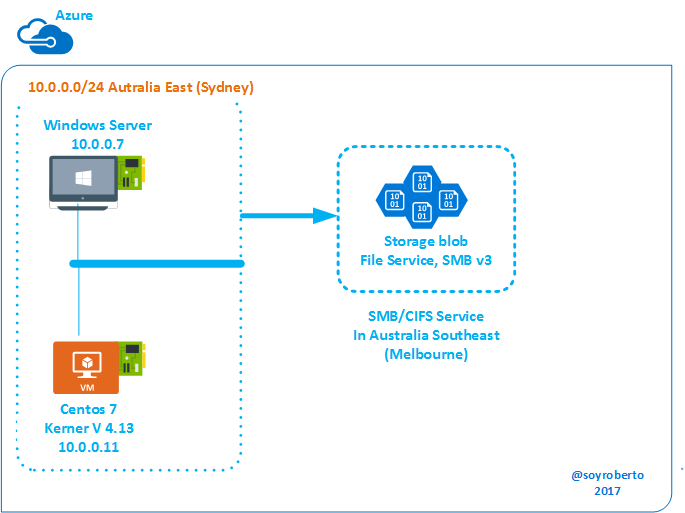 One simple setup, 2 VMs, 1 Windows, 1 Linux in Sydney to read files from a network share in Melbourne

Note: This can be done in CentOS, because it allows the use of ELRepo ( “ELRepo supports Red Hat Enterprise Linux (RHEL) and its derivatives (Scientific Linux, CentOS & others“)

And then install the selected version, one I chose was kernel-ml.x86_64, ml: means mainline stable

Once installed, it will confirm:

Make the new Kernel the boot default. Edit in /etc/default/grub the following line, it’s a ‘0’ (zero) even when it may look like an O

Another command for verifying

With this new Kernel mounting an SMB partition in an Azure File service found in a different region to the VM will be possible.

It has happened in some of the Centos Release 7 images from the Azure Marketplace that the kernel gets updated but not set as the default bootable, if that happens, follow the steps in the Update section just below. All the previous steps remain the same. Go to the Update Section.

Follow these section if the bootable kernel was not updated, make sure you followed all the steps previous to this point.

This command presents all the boot menu options available. It shows the kernel was downloaded and it’s available as bootable.

Check which is the actual default

Kernel 3.x! Which is line Number 1 in the boot file

Verify with uname -a